District Reports on Soil Sampling Orientation Survey and Rock Sampling with up to 22.9% Zinc at the Gruvberget Property

October 3, 2022 – District Metals Corp. (TSX-V: DMX) (FRA: DFPP); ("District" or the “Company”) is pleased to report on the results from a soil sampling orientation survey and additional rock grab sampling at the polymetallic Gruvberget Property located in the Bergslagen Mining District of south-central Sweden.

Soil samples were recovered on three east to west survey lines located across and north of the Gruvberget North Zone (Figure 1). All of the soil samples were analyzed by conventional (ICP-MS) and Ionic Leach (IL) methods.

Based on the results from our orientation survey we have commenced a substantial soil sampling program with Ionic Leach analysis on the Gruvberget Property that will extend over four target areas previously identified by our SkyTEM geophysical anomalies and historical mineral occurrences.”

Soil geochemistry can be seen as one of the most cost effective field data acquisition methods available to delineate and prioritize drill targets. The Gruvberget Property is largely covered by a thin veneer of glacial till (2 to 20 m), which makes traditional bedrock mapping and sampling challenging.

The recently conducted soil sampling orientation survey across and north of the Gruvberget North zone was implemented to evaluate two different analyses. A total of 37 soil samples were collected with a plastic shovel at a constant depth relative to the organic-soil interface around the B-horizon. The samples were analyzed by conventional (ICP-MS) and Ionic Leach (IL) analysis to determine which method is preferable before initiating a larger soil sampling program focused on and “down-ice” from our SkyTEM geophysical target zones and known mineral occurrences.

The main advantage of IL is the lack of drying and sieving, with risk of contamination during sample preparation, besides a reduced turn-around time at the lab. Samples are processed as collected (systematically) in the field, with no sample dilution prior to analysis, which allows for a very low detection limit to be achieved. Ionic Leach analysis does not actively digest the soil sample or any specific component of it, but only extracts free ionic elements from the soil leached from the primary (metal) source migrating towards surface. Anomalous results will identify targets directly to a source below, which includes possible “blind” mineralization in the bedrock. Drill targets supported by coincident geochemical and geophysical anomalies provide an increased level of confidence when prioritizing targets.

Soil samples from the orientation survey showed that both analytical methods (conventional versus IL) picked up the projected polymetallic mineralization at the Gruvberget North zone, however, the signature from IL analysis showed as much more pronounced. An extensive soil survey has been initiated at target areas on the Gruvberget Property defined by coinciding geophysical anomalies detected by the recent SkyTEM survey (see new release) and documented historic mineral occurrences.

Four additional rock grab samples have been collected in the field during reconnaissance field work, while ground proofing previously identified SkyTEM geophysical target zones. Three massive sulphide grab samples around a small historic working called Djurgruvan, located 2 km south-southeast from the Gruvberget South zone returned 10.0 to 22.9% zinc that is closely associated with a felsic volcanic rock, and will be further investigated (Figure 2). The fourth rock grab sample from the Gruvberget South zone returned 13.1% zinc, which expands the mineralized footprint of this zone. 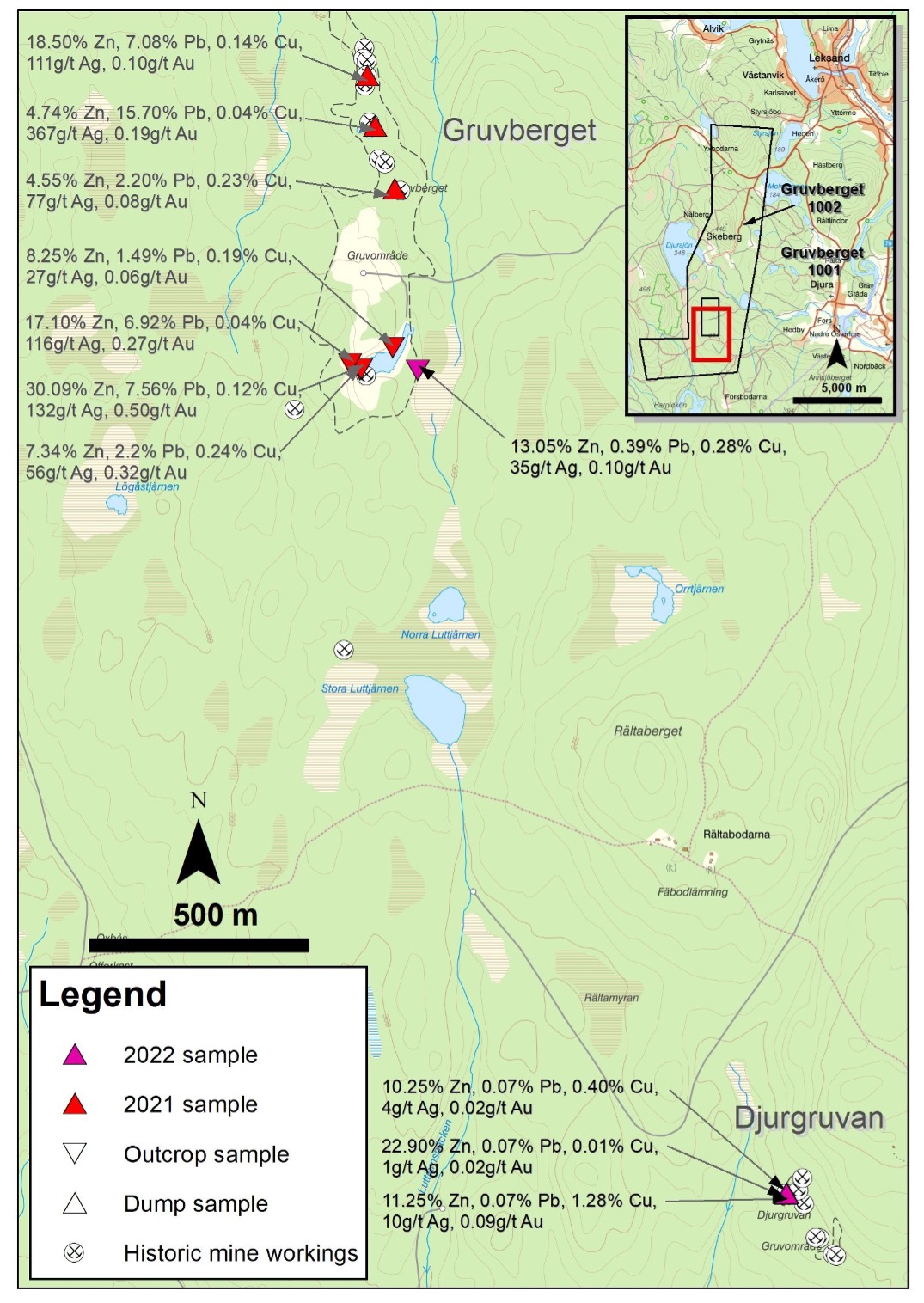 This news release contains certain statements that may be considered “forward-looking information” with respect to the Company within the meaning of applicable securities laws. In some cases, but not necessarily in all cases, forward-looking information can be identified by the use of forward-looking terminology such as “plans”, “targets”, “expects” or “does not expect”, “is expected”, “an opportunity exists”, “is positioned”, “estimates”, “intends”, “assumes”, “anticipates” or “does not anticipate” or “believes”, or variations of such words and phrases or statements that certain actions, events or results “may”, “could”, “would”, “might”, “will” or “will be taken”, “occur” or “be achieved” and any similar expressions. In addition, any statements that refer to expectations, predictions, indications, projections or other characterizations of future events or circumstances contain forward-looking information. Statements containing forward-looking information are not historical facts but instead represent management’s expectations, estimates and projections regarding future events. Forward-looking statements in this news release relating to the Company include, among other things, statements relating to the Company’s planned exploration activities, including its drill target strategy and next steps for the Tomtebo Property; the company’s interpretations and expectations about the mineralization of the Tomtebo Mine; the Company’s belief that the numerous gravity high anomalies identified at the historic Tomtebo Mine provide immense expansion potential; the Company’s belief that the modeled gravity high anomalies at the historic Tomtebo Mine could correspond with polymetallic and/or iron sulphide mineralization, or a mafic unit; and the Company’s belief that the gravity high anomaly located one kilometer to the northeast of the Tomtebo Mine represents a potential grassroots discovery opportunity with a modeled tonnage that compares with the historic production tonnage from the historic Falun Mine.

These statements and other forward-looking information are based on opinions, assumptions and estimates made by the Company in light of its experience and perception of historical trends, current conditions and expected future developments, as well as other factors that the Company believes are appropriate and reasonable in the circumstances, as of the date of this news release, including, without limitation, assumptions about the reliability of historical data and the accuracy of publicly reported information regarding past and historic mines in the Bergslagen district; the Company’s ability to raise sufficient capital to fund planned exploration activities, maintain corporate capacity and satisfy the exploration expenditure requirements required by the definitive purchase agreement between the Company and the vendor of the Tomtebo Property (the "Tomtebo Purchase Agreement") by the times specified therein; and stability in financial and capital markets.

Forward-looking information is necessarily based on a number of opinions, assumptions and estimates that, while considered reasonable by the Company as of the date such statements are made, are subject to known and unknown risks, uncertainties, assumptions and other factors that may cause the actual results, level of activity, performance or achievements to be materially different from those expressed or implied by such forward-looking information, including but not limited to risks associated with the following: the reliability of historic data regarding the Tomtebo Property; the Company’s ability to raise sufficient capital to finance planned exploration (including incurring prescribed exploration expenditures required by the Tomtebo Purchase Agreement, failing which the Tomtebo Property will be forfeited without any repayment of the purchase price); the Company’s limited operating history; the Company’s negative operating cash flow and dependence on third-party financing; the uncertainty of additional funding; the uncertainties associated with early stage exploration activities including general economic, market and business conditions, the regulatory process, failure to obtain necessary permits and approvals, technical issues, potential delays, unexpected events and management’s capacity to execute and implement its future plans; the Company’s ability to identify any mineral resources and mineral reserves; the substantial expenditures required to establish mineral reserves through drilling and the estimation of mineral reserves or mineral resources; the Company’s dependence on one material project, the Tomtebo Property; the uncertainty of estimates used to calculated mineralization figures; changes in governmental regulations; compliance with applicable laws and regulations; competition for future resource acquisitions and skilled industry personnel; reliance on key personnel; title matters; conflicts of interest; environmental laws and regulations and associated risks, including climate change legislation; land reclamation requirements; changes in government policies; volatility of the Company’s share price; the unlikelihood that shareholders will receive dividends from the Company; potential future acquisitions and joint ventures; infrastructure risks; fluctuations in demand for, and prices of gold, silver and copper; fluctuations in foreign currency exchange rates; legal proceedings and the enforceability of judgments; going concern risk; risks related to the Company’s information technology systems and cyber-security risks; and risk related to the outbreak of epidemics or pandemics or other health crises, including the recent outbreak of COVID-19. For additional information regarding these risks, please see the Company’s Annual Information Form, under the heading “Risk Factors”, which is available at www.sedar.com. These factors and assumptions are not intended to represent a complete list of the factors and assumptions that could affect the Company. These factors and assumptions, however, should be considered carefully. Although the Company has attempted to identify factors that would cause actual actions, events or results to differ materially from those disclosed in the forward-looking statements or information, there may be other factors that cause actions, events or results not to be as anticipated, estimated or intended. Also, many of such factors are beyond the control of the Company. Accordingly, readers should not place undue reliance on forward-looking statements or information. The forward-looking information is made as of the date of this news release, and the Company assumes no obligation to publicly update or revise such forward-looking information, except as required by applicable securities laws. All scientific and technical information contained in this news release has been prepared by or reviewed and approved by Garrett Ainsworth, PGeo, President and CEO of the Company. Mr. Ainsworth is a qualified person for the purposes of National Instrument 43-101 - Standards of Disclosure for Mineral Projects.