October 24, 2022 – District Metals Corp. (TSX-V: DMX) (FRA: DFPP); ("District" or the “Company”) is pleased to announce the identification of four new high priority targets on the polymetallic Gruvberget Property located in the Bergslagen Mining District of south-central Sweden. Detailed soil sampling grids have been completed over the new target areas, and Ionic Leach (IL) geochemical results are expected back before the end of 2022.

The four new target zones were identified through compilation work that comprised our recent SkyTEM geophysical survey results (see news release) in conjunction with geological and historical exploration data on the Property.

Garrett Ainsworth, CEO of District, commented: “Following our successful maiden drill program at the North Gruvberget zone during the Spring-Summer of 2022, we thoroughly reviewed all publicly available data sets along with our recently interpreted SkyTEM magnetic and conductive anomalies, which has identified four new high priority targets. We believe that these targets have high potential to extend known polymetallic mineralized bodies or to host new bodies of polymetallic mineralization, and we look forward to testing them in the next phase of drilling.

To further optimize our drill target prioritization, we have conducted a detailed soil sampling grid over each of the four target areas that include Backen, Gyllingen, North zone extension, and the South zone extension. We previously carried out a soil sample orientation survey over and adjacent north of the North zone, which established IL analysis as the most effective analytical method to identify blind polymetallic mineralization in bedrock that is covered by 2 to 20 m of glacial overburden.

Any soil geochemical anomalies identified at the four target areas that are coincident with existing geophysical anomalies and historical mineral occurrences will assist with drill target prioritization.”

The Geological Survey of Sweden (SGU) have scanned and digitized the majority of their paper archive, which is publicly accessible via their web service ‘GeoLagret’. Here, you can (geographically) search and download geological maps, data and reports, including relinquished exploration data by previous exploration companies previously active in the area of interest.

The historic Gruvberget South zone had historic bulk test production from 1926 to 1936 and 1987 to 1989 that totaled approximately 40,000 tonnes at 90 g/t Ag, 5.1% Zn, 1.9% Pb, and 0.3% Cu4. The Gruvberget South and North zones were previously owned by the Bredenberg family under the name AB Gruvbergsgruvan from 1900 to 1999. Past reports detailed how various mining companies (including the LKAB-BP Minerals JV, Stora Kopparberg and Boliden) tried to negotiate a deal with the Bredenberg family, but were not successful2,3.

The Company has recently completed a detailed soil sampling program at the four high priority target areas. The soil samples will be analyzed using IL analysis, which was determined as the most effective analytical method from a successful soil sampling orientation survey. At each target area, soil samples were recovered 40 m along lines that were 100 m apart, and grids were planned according to a glacial direction from the north. Duplicate soil samples were collected at every 20th sample location. High priority drill targets will be selected based on soil geochemical anomalies coincident with SkyTEM geophysical anomalies and historical mineral occurrences. 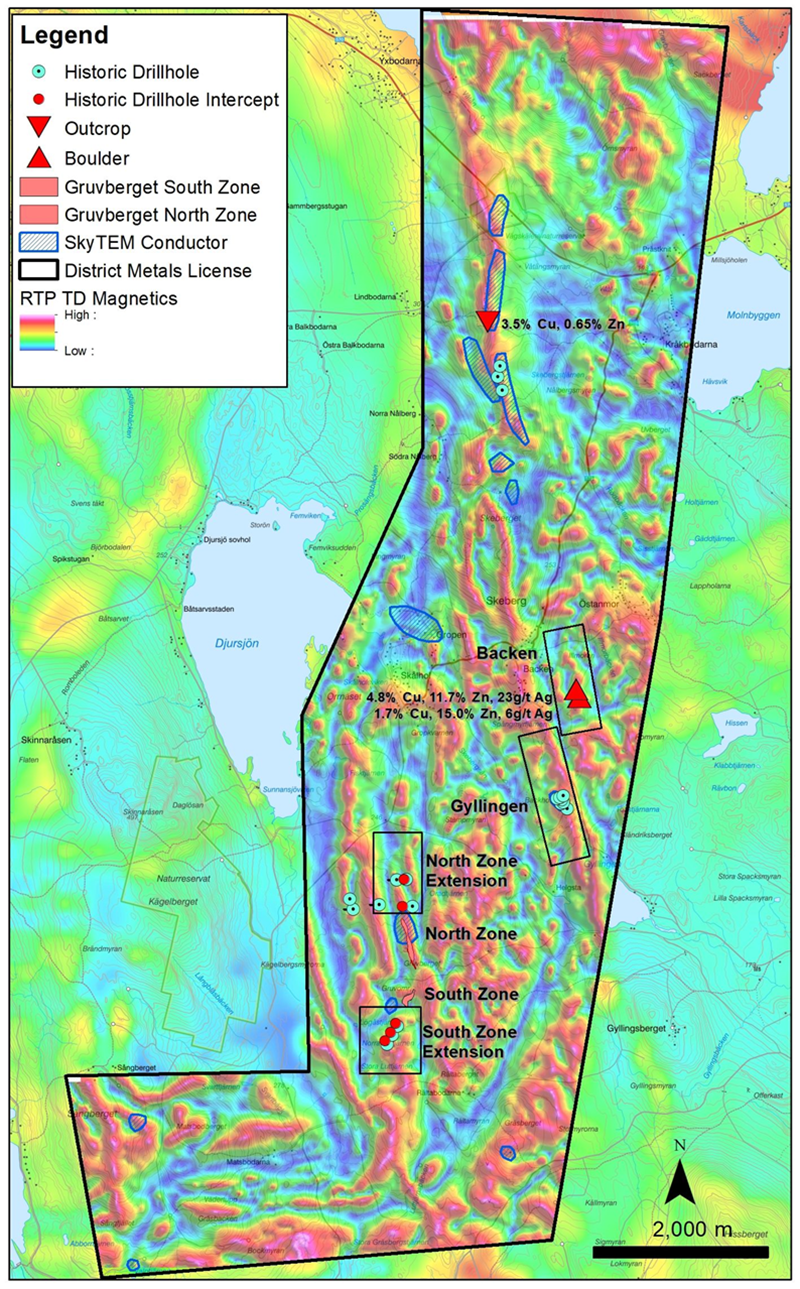 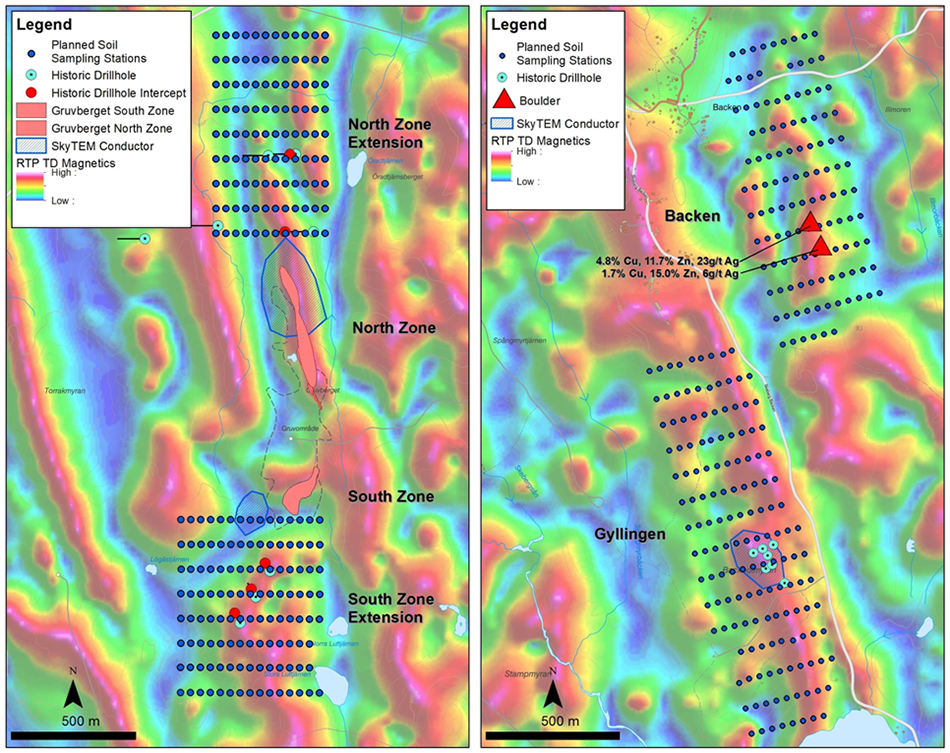 The soil samples in this news release were logged and bagged before submittal to ALS Geochemistry in Malå, Sweden where the samples were prepared for analysis. A 50 gram soil sample was sent to ALS Geochemistry in Ireland (an accredited mineral analysis laboratory) for analysis. Ionic Leach samples use a static sodium cyanide leach with a highly sensitive ICP-MS finish (“ME-MS23”).

These statements and other forward-looking information are based on opinions, assumptions and estimates made by the Company in light of its experience and perception of historical trends, current conditions and expected future developments, as well as other factors that the Company believes are appropriate and reasonable in the circumstances, as of the date of this news release, including, without limitation, assumptions about the reliability of historical data and the accuracy of publicly reported information regarding past and historic mines in the Bergslagen district; the Company’s ability to raise sufficient capital to fund planned exploration activities, maintain corporate capacity; and stability in financial and capital markets.

Forward-looking information is necessarily based on a number of opinions, assumptions and estimates that, while considered reasonable by the Company as of the date such statements are made, are subject to known and unknown risks, uncertainties, assumptions and other factors that may cause the actual results, level of activity, performance or achievements to be materially different from those expressed or implied by such forward-looking information, including but not limited to risks associated with the following: the reliability of historic data regarding the Tomtebo Property; the Company’s ability to raise sufficient capital to finance planned exploration (including incurring prescribed exploration expenditures required by the Tomtebo Purchase Agreement, failing which the Tomtebo Property will be forfeited without any repayment of the purchase price); the Company’s limited operating history; the Company’s negative operating cash flow and dependence on third-party financing; the uncertainty of additional funding; the uncertainties associated with early stage exploration activities including general economic, market and business conditions, the regulatory process, failure to obtain necessary permits and approvals, technical issues, potential delays, unexpected events and management’s capacity to execute and implement its future plans; the Company’s ability to identify any mineral resources and mineral reserves; the substantial expenditures required to establish mineral reserves through drilling and the estimation of mineral reserves or mineral resources; the Company’s dependence on one material project, the Tomtebo Property; the uncertainty of estimates used to calculated mineralization figures; changes in governmental regulations; compliance with applicable laws and regulations; competition for future resource acquisitions and skilled industry personnel; reliance on key personnel; title matters; conflicts of interest; environmental laws and regulations and associated risks, including climate change legislation; land reclamation requirements; changes in government policies; volatility of the Company’s share price; the unlikelihood that shareholders will receive dividends from the Company; potential future acquisitions and joint ventures; infrastructure risks; fluctuations in demand for, and prices of gold, silver and copper; fluctuations in foreign currency exchange rates; legal proceedings and the enforceability of judgments; going concern risk; risks related to the Company’s information technology systems and cyber-security risks; and risk related to the outbreak of epidemics or pandemics or other health crises, including the recent outbreak of COVID-19. For additional information regarding these risks, please see the Company’s Annual Information Form, under the heading “Risk Factors”, which is available at www.sedar.com. These factors and assumptions are not intended to represent a complete list of the factors and assumptions that could affect the Company. These factors and assumptions, however, should be considered carefully. Although the Company has attempted to identify factors that would cause actual actions, events or results to differ materially from those disclosed in the forward-looking statements or information, there may be other factors that cause actions, events or results not to be as anticipated, estimated or intended. Also, many of such factors are beyond the control of the Company. Accordingly, readers should not place undue reliance on forward-looking statements or information. The forward-looking information is made as of the date of this news release, and the Company assumes no obligation to publicly update or revise such forward-looking information, except as required by applicable securities laws.

All scientific and technical information contained in this news release has been prepared by or reviewed and approved by Garrett Ainsworth, PGeo, President and CEO of the Company. Mr. Ainsworth is a qualified person for the purposes of National Instrument 43-101 - Standards of Disclosure for Mineral Projects.